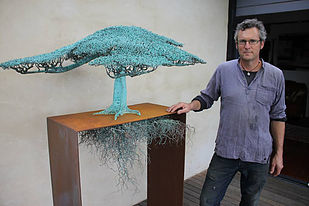 Both minds think alike when it comes to art and science, it seems.

Ulan joins a growing alumni of four prize winners named in Dr Wendy Wickes’s honor as part of the Waterhouse prize. Previous winner Shoal of Shame by Victoria Beresin is currently on loan to the United States Embassy in Canberra.

Dr Wendy Wickes’s partner Michael Strautmanis said it was appropriate the sculpture of a tree should win given South Australia established the first Government forest management organisation in the, then, British Empire.

“Abor Sole was certainly one of the more artistic pieces, a delicate piece, among finalists,” he said.

Ulan studied as a biologist and horticulturalist and was last year a finalist in the Wynne Prize at the Art Gallery of NSW.

``These passions have stayed with me,’’ he says. “I tend to take people’s choice awards. I think my work is pretty accessible, it’s not a grand conceptual work but there’s quite a bit of work that goes into making it.”

In his artist’s statement he says: Abor Sole (Latin for Tree of the sun) reflects the environmental system that relies on a delicate balance between carbon dioxide and oxygen.  It evokes a sense of power coupled with fragility.  By illustrating the foliage with the roots I hope to illuminate the architectural structure of the tree in its entirety.  The foliage describes the conditions of the atmospheric environment where as the roots reveal the narrative of the subterranean environment.  My work becomes a mediation on the environment: from the monumentality of landscape to the minutiae.

Emeritus Professor at the University of New England Klaus Rohde was one of the judges of the official winners announced in June. Professor Rohde is a biologist and an exhibiting artist, interested in the intersection of biology, ecology and other disciplines, such as philosophy and ethics.

“The chosen piece is not only an outstanding and stunning work of art, but also a piece that reveals to the public the astonishing complexity of nature, here not analysed from a scientific point of view but shown as perceived by a great artist,” Professor Rohde says.

“Complexity is the very essence of nature, revealing itself even in the smallest organisms at the microscopic level, and in this case in a tree. Ulan Murray has captured this brilliantly in his Abor Sole.”

Ulan Murray uses a variety of new and recycled materials including copper, stainless steel and mild steel to produce his sculpture. ​ 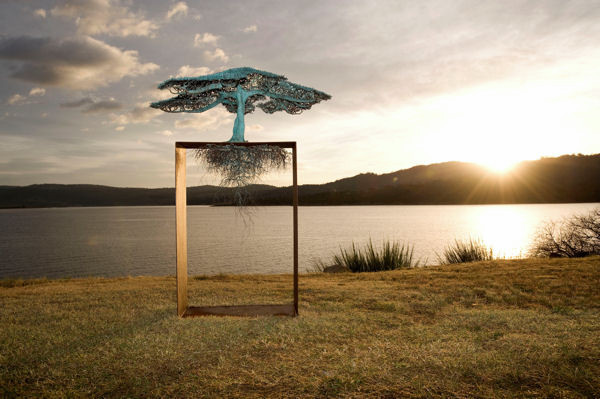