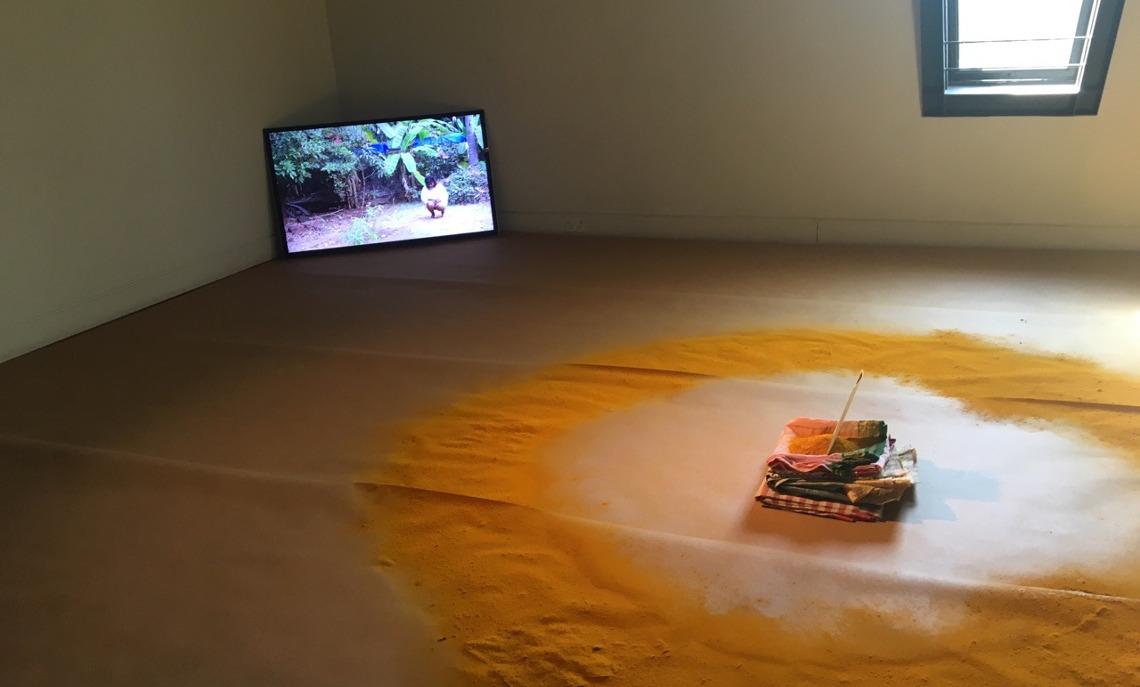 SHIVANJANI LAL - Like This Incense Your Spirit Must Burn

Shivanjani Lal is a twice removed Fijian Indian Australian artist whose history is intrinsically linked to the indentured labour diaspora of Asia and the Pacific. She works across mediums to explore her cultural dislocation, which seeks to account for memory, erasure, healing, and the archive.

Currently Lal uses spatial and material activations along with video to create documents which analyse her personal narratives in the broader context of the social history which brought her family from India to Fiji and now to Australia. This is done in an effort to redefine the history of the Indo-Fijian Community away from the narratives produced by the current political climate in both Fiji and India.

Her current research posits that history has obliterated and obfuscated the communal memory of her community but that her body and the landscapes she is from hold onto both.

the thread is made of flesh

The spirit is a floral cotton jungle breathing in pentatonic scales. Naked fruit flies hang in dark blue humid air. The sun speaks a puraana kahani. Sour. Warm. Palpable. The thread sews through collapsing clouds. Polyphonic mynah bird choirs orbit the haldi sun halo. Even when it burns. Even when it blackens. Even when it chars lips and splits tongues.

Later – much later – burn the old blood off. To burn a memory that is deposited in the blood is the process of blackening.

look closely at her photograph. take with you a kerosene lamp.

A puraana kahani can be brought back into the blood with the placement of water between a monochrome photograph and palms full of marigold – water that is composed of equal parts milk and bone – water that swells when the hurricane hits– water that remembers every time it is touched.

does it begin in the blood?

does it begin in the water?

Water conducts the alchemical change from land-locked to hungry ghost - hanging by the thread woven through the DNA for one hundred and forty years – hanging by the thread with one finger pointing to naraka – one finger pointing to the sky. Water is percussion hitting hard on the corrugated tin iron roof as cha is prepared in a hundi on a flame – as she opens her mouth and shines her gold tooth – as she adjusts her petticoat and clears her throat – beta ek story bathao.

To unbutton an injury inflicted on psychic tissue by water tread your fists lightly into the floral cotton jungle bed. Loop your spinal cord like a thousand-legged millipede. Extract bittersweet dye from the sun. Breathe in pentatonic scales – raag maulkauns for reflection – raag bhopali for peace – raag durga for luminosity. Separate the thread

The unbecoming of a spirit is rooted in archival documents carried in the bones – the unbecoming appears in dreams – in apparitions – in dark blue air where naked fruit flies fall. The unravelling of a puraana kahani is chronicled in tape-recorded talanoa tableaus – in baby blue paint metamorphosing in the cyclone – in the unclothed body of a cane pulled from sweet green dirt. In the folds of a disembodied language lives the undoing of time – time stitched to yaqona and bidi smoke – time stitched to cracked heels and haldi dust – time stitched to soft pockets of air in sugar milk. To burn sugar milk that sinks the spirit is the process of erasure.

does it end in the body?

does it end in the water?

which holds the unbecoming. In seventy-two days the thread stitched together one hundred dialects.

Later – much later – the thread will stitch through disembodied language – the contours of vernacular.

the thread is made of flesh.

the thread is made of flesh.