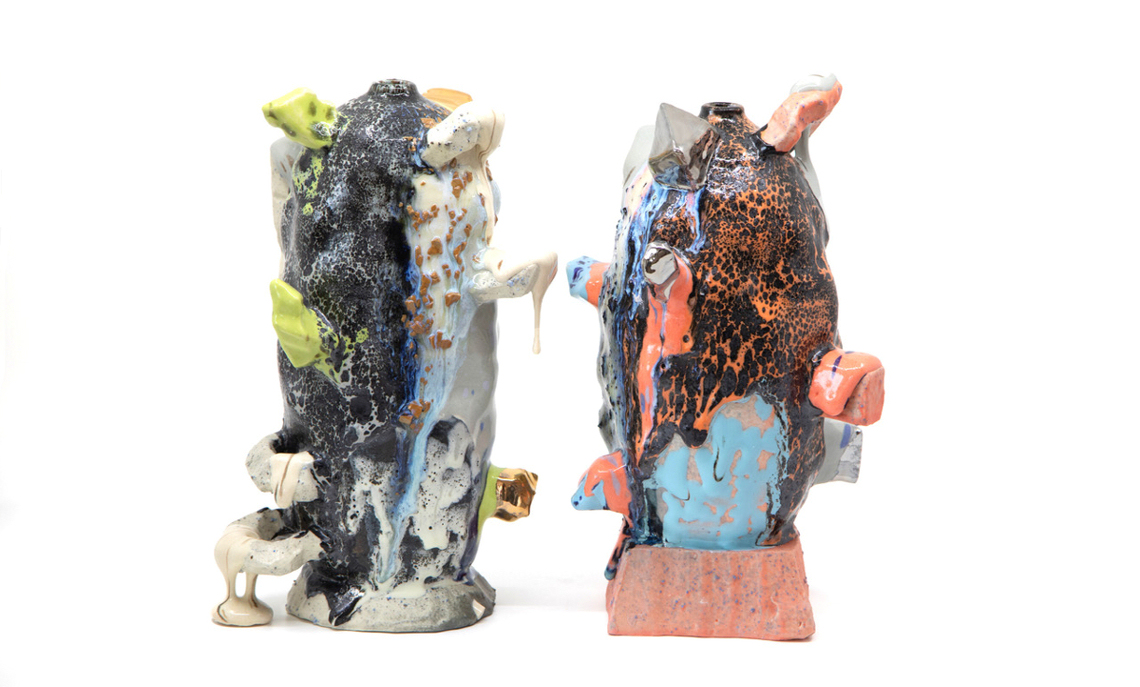 Melt, Drip, Lustre is an exhibition of new works by Sydney based ceramic artist Luke Ryan O’Connor presented at BVRG : Port. (our pop-up gallery space, situated on the wharf in Eden at the brand new Welcome Centre)

The show sees Luke continue his process driven exploration of the ceramic vessel through intriguing experiments into colour, texture and form. Made in the context of the ongoing pandemic and NSW Lockdown, the exhibition sees Luke embrace the limitations of working within his home studio to create a multitude of small scale alluring vessels.

Approaching making in a playful manner his sculptures incorporate a combination of throwing on the potter’s wheel, coiled hand building and haphazard slip cast additions. While referencing the utilitarian language embedded in the history of ceramics the work remains formally and functionally ambiguous.

Conceptually his practice plays to notions of queer adversity, to celebrating scars and dissociating enhancement from conventional ideals of perfection. His work has been exhibited across Australia as well as recent international shows in New Zealand & Germany.

Rohan: Hello Luke, how are you?

Luke: Not too bad thank you.

Rohan: All this distance between London and Sydney and we have a good internet connection. What are the odds?

Luke: Is it morning for you?

Rohan: It’s just gone nine o’clock in the morning here in London. I’ve been here nearly ten years and I still can’t seem to work out the time difference between Australia and the UK. But I appreciate you speaking to me at a bit of an odd hour regardless.

Rohan: So where are you at the moment?

Luke: I’m in Camperdown, in the Inner West. I’ve been here around five years. I had a studio in Glebe for a while but now I’m out here. Have you heard much about the lockdowns in Australia, back in the UK?

Luke: I was lucky enough to have my new studio set up just before we went into this latest period of shutting down.

Rohan: So how has lockdown been for you, as an artist?

Luke: Some of it has been great in terms of having that time to spend on making my work. I was teaching a lot at night before the pandemic but then as soon as it hit, we obviously stopped, so I’ve spent a lot of time working on not only making art but developing my practice. Which has been good for this show in particular.

Rohan: Before the pandemic, there was such a glorification of time as some antidote to a lack of productivity. But then suddenly we had this abundance of time and I remember talking to a few artists here after the easing of the first lockdown in the UK, and there was a general idea that people seemed to realise quickly it doesn’t automatically lead to a greater output. Did you feel productive?

Luke: I think I have been incredibly productive.

Luke: My work is very process driven. I have to do a lot of experiments to get the results I need which is very labour intensive. For example, testing glaze recipes and then finding the ones that work best for me. All that takes a huge amount of time, so it’s not necessarily that I was making artwork after artwork but more so the steps necessary to do that down the line. I was really focusing on the science behind the process to make the art. Also not having to worry about a commute or dropping everything to run to an appointment, was also a huge benefit of the lockdown. As I said before too, having a studio in my living space also was a new thing that I found really helped with developing work. Being able to just pop in and out, work, relax and then come back to it all in one area was great.

Rohan: So when are you usually at your most creative?

Luke: Mornings and during the day. I like to work relatively normal hours and treat it like a job as best I can. I think this is important to help with that separation of being an artist and the other side of my life. Being able to switch off from that is important. The hardest thing for artists is that you are just constantly thinking about what you’re doing and what you’re creating.

Rohan: I think that’s a healthy thing to do for any creative. To learn to shut off the noises that say, keep editing or testing or whatever. In the same way that someone with a 9-5 job closes a laptop and walks away from their desk, learning to down tools and go back into the real world is also healthy. Otherwise, where does it end?

Luke: It’s obviously been different now with all the time that lockdown affords you, but after the opening back up of things, I am definitely going to have to get stricter with myself about not working too long or on the weekends or just being alone too much.

Rohan: It’s kind of the nature of being an artist, that you have to be ok with your own company. Almost, more than ok.

Luke: Moving from a studio that I shared with a lot of other ceramic artists to where I am now, being totally by myself, I am finding it a bit weird. I can go for days without seeing anyone. Working too long in isolation isn’t the best.

Rohan: So you started off with painting at university, but then sort of fell into ceramics. Is there something you connected more with this medium that you did with painting?

Luke: My earliest memories of creating things, or just even being excited about art, has been through ceramics. At my parents’ house, which is basically rural Western Sydney, when it rained there would be these huge clay deposits and I have such amazing memories of pulling clumps from them and spending hours making anything I could. And that sort of just continued on, through school and high school. I started university with painting, but then moved to sculpture because I wanted to work in something more three dimensional. I ended up taking a gap year and went travelling for a bit, took some time out to think and whenever I tried to land on something that I wanted to do, it was always something with my hands and something that was skills based also. So when I got back, I just dove right into it.

Rohan: A lot of what is written about your work online references utilitarianism, so it’s interesting you say you chose something that was skills based because the medium you work in is one that is traditionally for functional objects, but you’re working now in the world of contemporary art which is almost the exact opposite of that. Do you think the artworld is wary of ceramics as a medium for that reason, in that it’s seen as a design medium not an ‘art’ medium?

Luke: I definitely feel like it’s far more accepted now that it’s ever been. Outside of the artworld there has been a huge boom in people taking private courses and just generally taking an interest in the medium. Instagram has played a big part in that I think also. Being able to show your art on there, people enjoy that.

Rohan: The crossover of the artworld and the design world is so fascinating. There should be more treatment of everyday design objects as art, I think. The Design Museum here in London is an amazing example of how to do that well.

Luke: It’s something that seems to not be so much a thing here yet, but I definitely know of people working in places like New York that do tread that line of creating pieces of design that could be works of art also, despite their functionality.

Rohan: It’s almost like it just comes from this unfortunate need to have to constantly pigeonhole yourself as a creative. Mostly for other people’s sake. To have to answer those kinds of questions of, is it a vase or is it an artwork?

Rohan: Something else that cropped up a lot in the articles I found about you online, in terms of the themes you work with, is the phrase queer adversity. What does that mean to you and how to you interpret that through your work?

Luke: Exactly what you just said, about pigeonholing yourself or having to assign a label to your work to elevate it from something mundane to art, as a queer person that’s something that I’ve wanted to explore within my practice. Presenting something that is misshapen and maybe not as traditionally functional but that is still beautiful, to me is representative of the queer experience. These pieces are these things that sit very much outside what ceramics should be, or what people’s ideas of what ceramics should be. And that is what it’s like growing up queer sometimes. Art was always my refuge, growing up in such a rural area. It was my ticket to living an interesting life.

Rohan: There is a heaviness to that theme obviously, commenting on the marginalisation of queer people in traditionally non-queer spaces, but there is also a very camp and quite playful nature to you work. How do you tread that line?

Luke: I feel like that is what queer people have done throughout history. To flourish in adversity. I’ve always wanted to be fun and playful in my work, not to take it too seriously. I’ve always loved to work in bright colours, pastels and gold and the older I get and the more I embrace my queerness, using these tones, which are usually seen as camp, would not be something I would have done when I was younger and less open or confident, especially being at home where I grew up. So the exploration of this, in itself, is like an exploration of my own journey to being totally at ease in myself.

Rohan: That’s really lovely to hear. That you use colours now that you might not have used if you weren’t queer. It’s like being queer is permission, or greater permission to be playful in life.

Luke: I guess so.

Rohan: Well congratulations on the show. It’s called Melt, Drip, Lustre and it’s from when?

Luke: From the 18th of December until the 8th of February at the Bega Valley Regional Gallery’s popup space at the Eden Port.

Rohan: Thank you again and best of luck with the preparation.